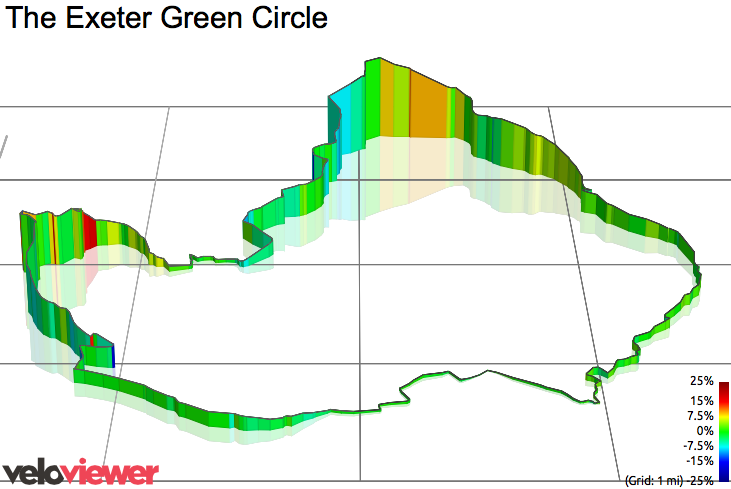 Exeter’s Green Circle is described as

It’s made up of five sections and it’s mix of trail, track and pavement and it really is quite delightful to run. Its taken me a while to get to it, largely because you have to have your wits about you to navigate it at speed! There are several occasions, noticeably when bombing downhill that you suddenly have to turn off. The signage is quite subtle in places, but still, it’s fast becoming a favourite set of trails and pavements to play on.

Here’s a visualisation of it from Veloviewer, using my last lot of Strava data for the route.

You’ll see it has a couple of peaks, but for the most part it is flat.

In the order I usually run it, it goes like this

I join two thirds of the way into the The Ludwell Valley Walk where the quiet roads and lanes link Wonford and Whipton. This section is essentially the warm up, through the playing fields and up the hills and bike paths to Mincinglake, the first trail section

The Mincinglake Walk This section includes Mincinglake Valley Park, a former landfill site, now an attractive countryside park with butterfly-rich flower meadows. There are some fine views down the Exe estuary to the sea from viewpoints near the route in the Valley Park. This is one of my favourite sections with a pretty steep climb as it tracks around the back of City, north of Sylvania Park and the Stoke Valley Estates. This section is almost entirely on trails. We head on to the

The Hoopern Valley Walk (a little over two miles) – It follows parts of the picturesque Hoopern Valley through the University of Exeter’s Streatham Estate with its arboretum before winding close to the City Wall and through the centre of St David’s revealing the now dry valley under the Iron Bridge. Down to the River we go

The Redhills Walk (about two and a half miles) – The Millers Crossing bridge over the Exe is one is pretty impressive, especially when the river is high. Once across this we head through the flatlands of River Exe flood plain, with its allotments and playing fields, before heading up to the high points of Redhills and the western fringes of Exeter. There are one or two steep climbs on this section. I get a big vague where this section joins the Alphin Brook section… Crossing over Dunsford Hill we hit a fantastic trail section. One of my favourite of the whole walk. The drone of the A30 gets ever louder to the point where on the first time I ran it I was convinced I would come round a corner and hit the hard shoulder! Well, this doesn’t happen, and once the heights of Redhills have been descended we hit the next section

The Alphin Brook Walk (about three miles) – This section tracks through the valley of the Alphin Brook. The upper section of the brook flows through rich agricultural land separated from the city by a ridge of hills. As it reaches the Exe valley the brook is tamed in a modern channel to prevent it flooding the old village of Alphington and its modern neighbour the industrial estate of Marsh Barton.

At the moment, its taking around 1h50 to run it, and including my start and finish legs to join the circle, its coming in at 13.2 miles. Thanks to Mike for getting me round the whole circle for the first time.

It has become a regular part of my run activity, and exploring it has led to a greater sense of adventure in the rest of my city running. I’ve stopped running the same old roads, and have been begun exploring the network of tracks, trails and paths that weave though this city, and this is making for much better runs.