What a fun filled and action packed Sunday morning!

Having dropped Bethan off at the schools challenge drop off point, I walked up to the start. I arrived at 8:20, and checked out the start set up, found the starting flag for a sub 1:45 finish and then pottered around loosening up and enjoying the pre race buzz.

With only 3000 or so runners, it was nice to not feel too much pressure and almost no pushing and shoving, and in the 15 minutes or so before the start, we are all moved forward quite a lot. I ended up somewhere in front of Sub 1:30 flag. No pressure there then.

We went from this 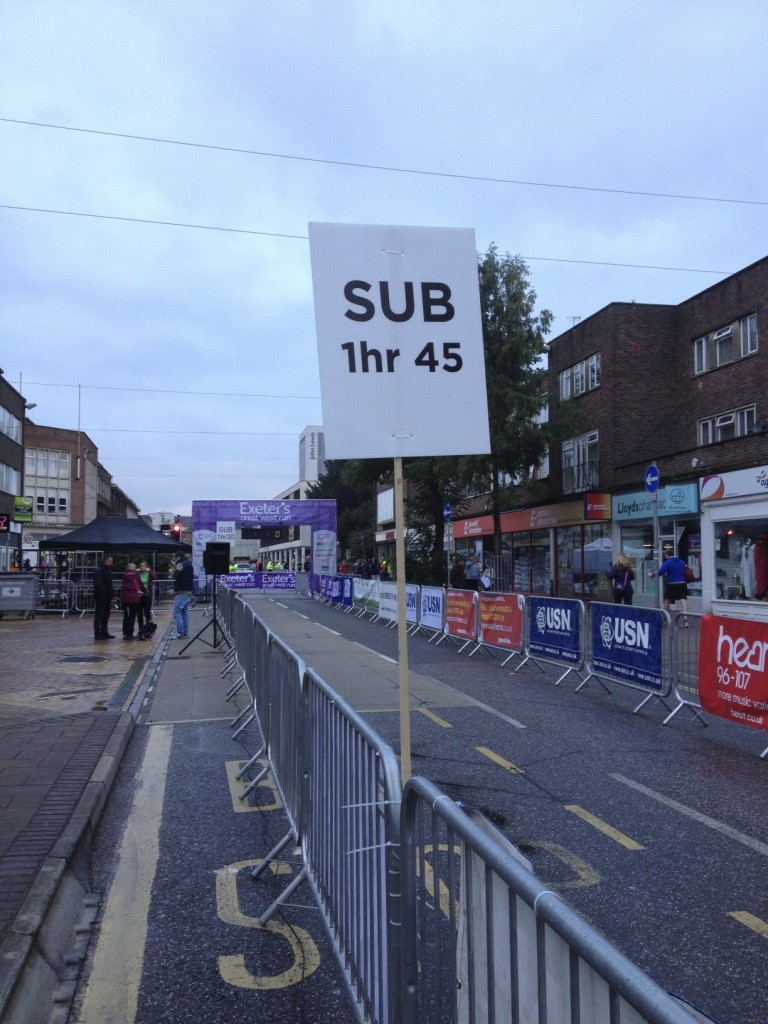 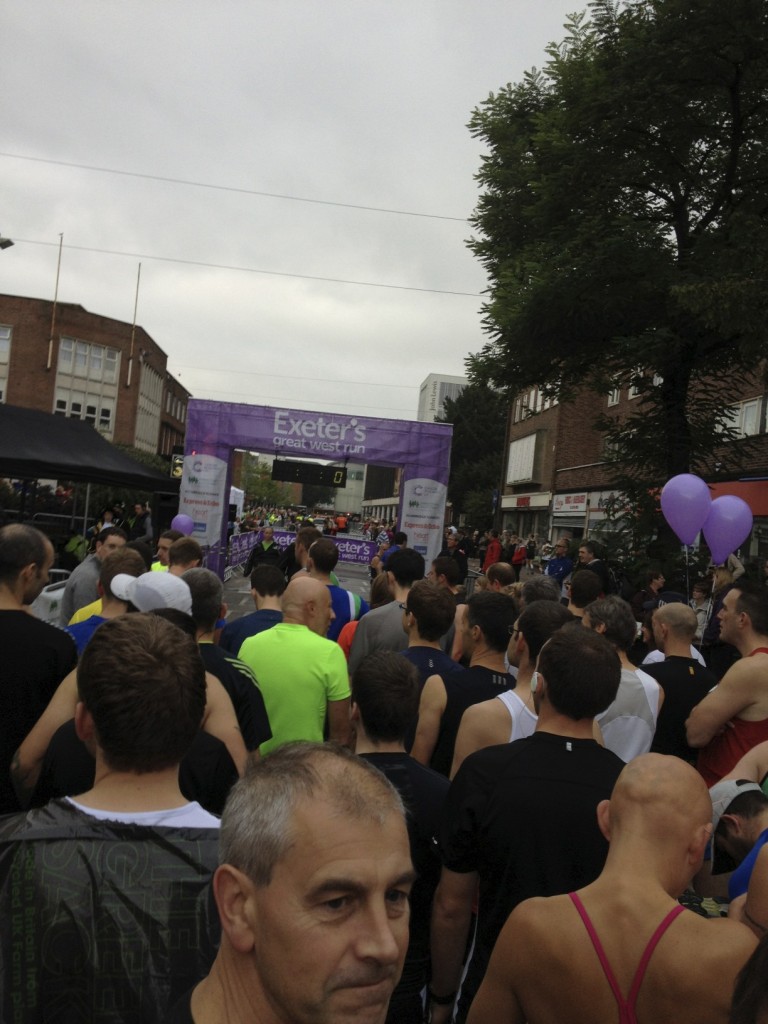 I ended up pretty near the front.

I had toyed with taking my own water or not, and in the end decided I would. I train that way, and I like to be as self-sufficient as possible, so it made sense to me. I am glad I did, little and often worked well, and it meant not getting caught in drink station chaos! (And not contributing to the roadside debris.)

The course profile looked like this. The joy about this part of the world is living close to the sea, and essentially, at sea level. However, this does mean that most places are up. Exeter itself is built on a bit of a ridge, and while it is no San Francisco, one can happily cris-cross the city going up and down hills all day long!

9:00 came and we were blasted off by a very fancy looking Lord Mayor of Exeter (and her helper).

My first observation was it wasn’t as hard running that close to people as I had imagined. In fact, compared to bike racing when having someones elbows millimetres from your own is positively terrifying, it all felt quite civilised! I set off way too quickly, but guessed this would be the case. The first 2 miles were mostly flat and down hill, so I figured I would be fine.

The bunching soon eased out after about a mile. I thought of settling in to my desired 7:45 target pace, but in the end thought, no, I am just going to keep going for as long as I can. Not really a strategy, but ‘run like hell for as long as possible’ was one had mentally prepared for.

There was a great crowd for the first 3 or so miles – lining the streets. It thinned out, but I even noticed several old ladies on their doorsteps, in their dressing gowns, clapping away while enjoying their morning smoke. The organisers had marked out ‘Cheer Points’ on the map and had encourage people to gather at these. This meant that large clusters of spectators at regular intervals around the course.

I think this section was my favourite bit: undulating country roads and I settled in to a good 7:20 ish pace. I breezed through the first drink station without needing to slow / grab something to drink. Course sections like this are part of what makes running so magical for me. To be moving purposefully, under my own power though scenic lanes is part of my ‘I run because it reminds me that running has its own intrinsic value that helps frame the world I live in’ mindset.

This was the surprise section for me. The only bit of the course I had not previously run. More country roads and one that followed the river. I guess this is why I thought it would be flat. Err, no it wasn’t. This section was an out and back section and I crossed the mile 5 marker, the race leaders were on the return section, just coming to the mile 6 marker. The lead car had a 33 minute time on it. This section was pretty challenging, helped by a samba band at the mile 5/6 drink station. Said band could be heard for at least 1/2 mile in either direction. Thanks to all those people who got themselves to this point to cheer. Turning was good as well, as essentially, it marked the half way point. In my mental preparation (and much like most of my runs) I have marked out sections in my head (I have a kind of photographic memory for maps and routes); this was a significant section. Not because I didn’t know the route, nor that I doubted my abilities, but because it heralded the start of the return home. I do wonder about running longer distances and how I might do this, but I guess that might be what route cards are for!

So, this section was the return back to civilisation and after the steady climbs, it was reasonably ok, I was happy enough, clicking miles off at a decent 7:30 or so pace, feeling comfortable, and really enjoying the progress so far. I was however gearing up for the start of the hilly section. I did try to smile a lot – it only seemed a fair exchange to all those people stood out on a damp October day cheering. I also reminded myself to say thank you to the race marshals, who did a great job keeping the roads clear and safe.

This section through the university campus was hard. A biggish climb and a couple of smaller steep ones meant that through mile 9 my mile pace crept above 8 minutes for the first time. I took on a SIS Go gel at this point, I wanted some power for the homeward run. Knowing that if I got through this bit feeling ok, it would all be fine. I really like the roads they picked for the closing 3 miles, and train on them regularly. It was great to see so many spectators through this section.

Through one of the course ‘cheer points’ This was also an out and back section with a couple of climbs, one of which, a short sharp one, is a regular on my training runs. I tried to push myself in this section, got back to 7:30 pace and just managed to hold a sub 8 minute on pace on the climb (according to Strava, a personal record at 3:56 (and 15th quickest time overall on that Strava segment)). In fact, according to Strava, I set no less than 14 personal records, including a 45 min 10K time.

The last 3.1 miles were packed with cheerers, (and offers of Jelly Babies) – the crowd really was great, and when I realise I could run a sub 1:40, a real encouragement  to push as hard as I could.

Well, as best as I could manage in terms of a sprint, I held an average 6:35 pace for around 3 minutes, peaking at 6:04 as I crossed the line. How someone can do that for an entire run is pretty awesome in my book. Credit to the winner, Tom Merson who finished in  1:10:02. By contrast, this is 7 minutes slower than the Bath Half Marathon, one people go to to set a PB.

My pace against the course profile – is there a way on Stava web app to smooth this out a bit? 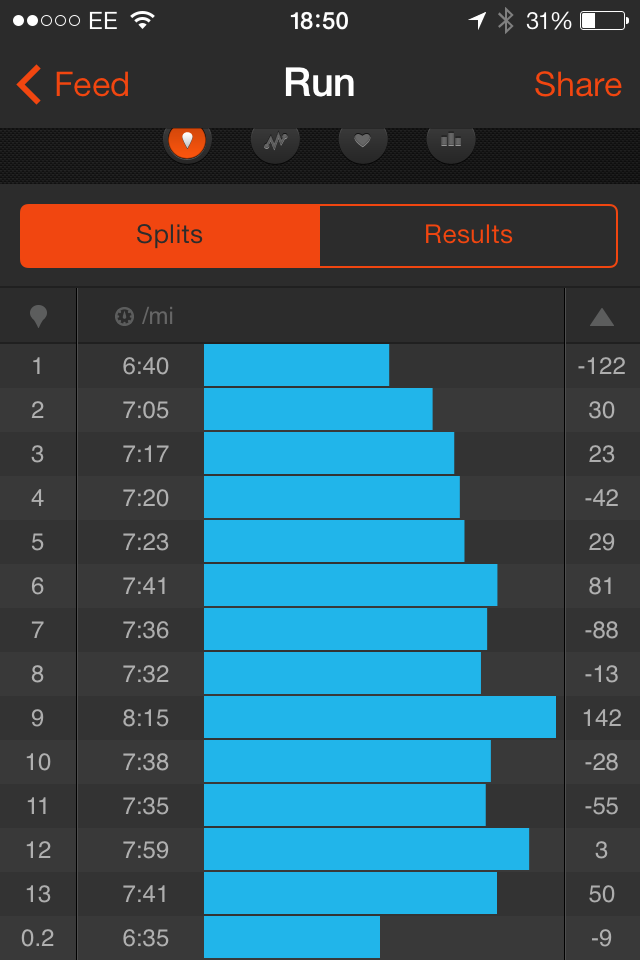 Definitely the country lanes. these were a real joy to run, especially with no worries about cars. And, the last mile was awesome. cheerers lining the streets, some familiar faces and loads of support.

My Inov 8 233s were the right choice over my GoBionics, and served me perfectly for the conditions underfoot and the speed I ended up running.

All in all, to get from my July Coeliac diagnosis to half marathon fit in about 3 months feels a great achievement, and one I am really proud of. I am looking forward to carrying on with getting the miles in and pushing the distances up and up on my weekend long runs.

And a shout out to Bethan

Bethan (number 200) had a great Schools Challenge run, was delighted with her medal, and wanted to do it all over again. Well done Bethan, and all the other children and helpers for running a half marathon as well – a mile a week for 12 weeks, then one mile on the day. She says she can’t wait for next year, and I am already plotting with the teacher who organised our school’s 20 or so runners how we can keep the momentum going over the winter. Any ideas? 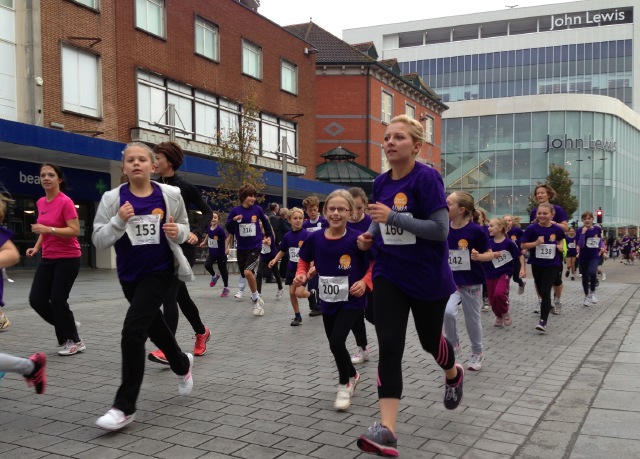 And here we are basking in the glory of our successes 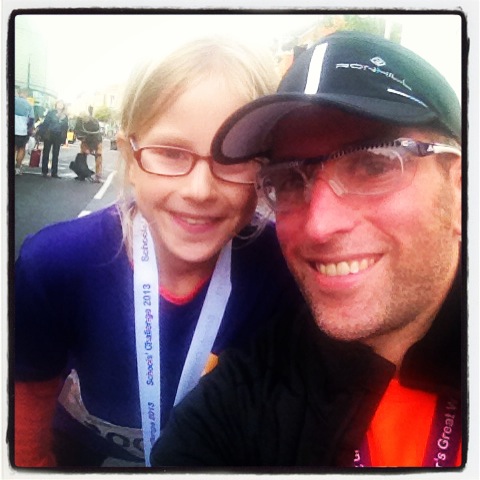