Week 43, according to TrailrunnerX shows I have run 4 runs with a total distance of a little over 33 miles. This is up on weeks 39 – 42 although to be fair, they were really two taper weeks, my first ever half marathon, and a week of taking it easy!.

I have mostly run roads, and used the GoBionics. Although my Saturday long run was in my Inov 8’s and involved a new adventure… a 15 mile loop out to through Shillingford Abbot up to Haldon Hill and back via Dunchidiock. Total ascent was around 1900 feet, which is pretty impressive because although Exeter is hilly, nothing is that big. 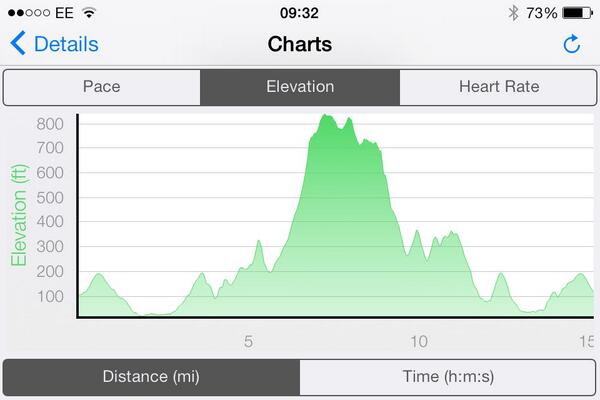 I love how running apps always seem to over emphasise your achievements! Still that climb, all 17 minutes of it nearly broke me, forcing me to walk. If it wasn’t all the wildlife, deer, owls, and so on, I may have slowed quite considerably.

(I loved this route and am looking at how I can safely extend it to build up the milage, and keeping the hills in. It is almost all road running – no pavement – and while it is generally early, and I am well lit, I need to make sure I stay safe.)

The view from the top of the hill.

Before running I had a banana, and took a Nakd Gluten Free bar. It was a cocoa orange bar. I ate it at around mile 9 and it did the trick. In fact it was perfect, and it tasted nice. not something I can say about gels!

I am going to experiment more with their bars when running, They are a mix of dates and cashew nuts with other flavourings, and provide around 20g of carbs and 2-5g of protein per bar. I am also looking at experimenting with Chia seeds. Has anyone had any experience of these?

Week 44 of running starts a 20 week programme I have scheduled. Not with any particular goal, but one that should build fitness and endurance up to the 50 mile mark. At least that is the plan, but my ankle is feeling a little odd at the moment, a strain perhaps, so I need to monitor that and try to take it easy through this next week.

I am also almost at tipping point when it comes to entering the Hope 24 Challenge in Plymouth next may. It’s a local-ish event, on a private estate I knew really well. I need to see if I can find a crew to support me before making the final decision though. I might enter on a sponsorship place, as part of the incentive to commit to it – I think I could raise £250+ of sponsorship money… feel free to indicate your support in the comments.

So onwards, through the storm and in to week 44.