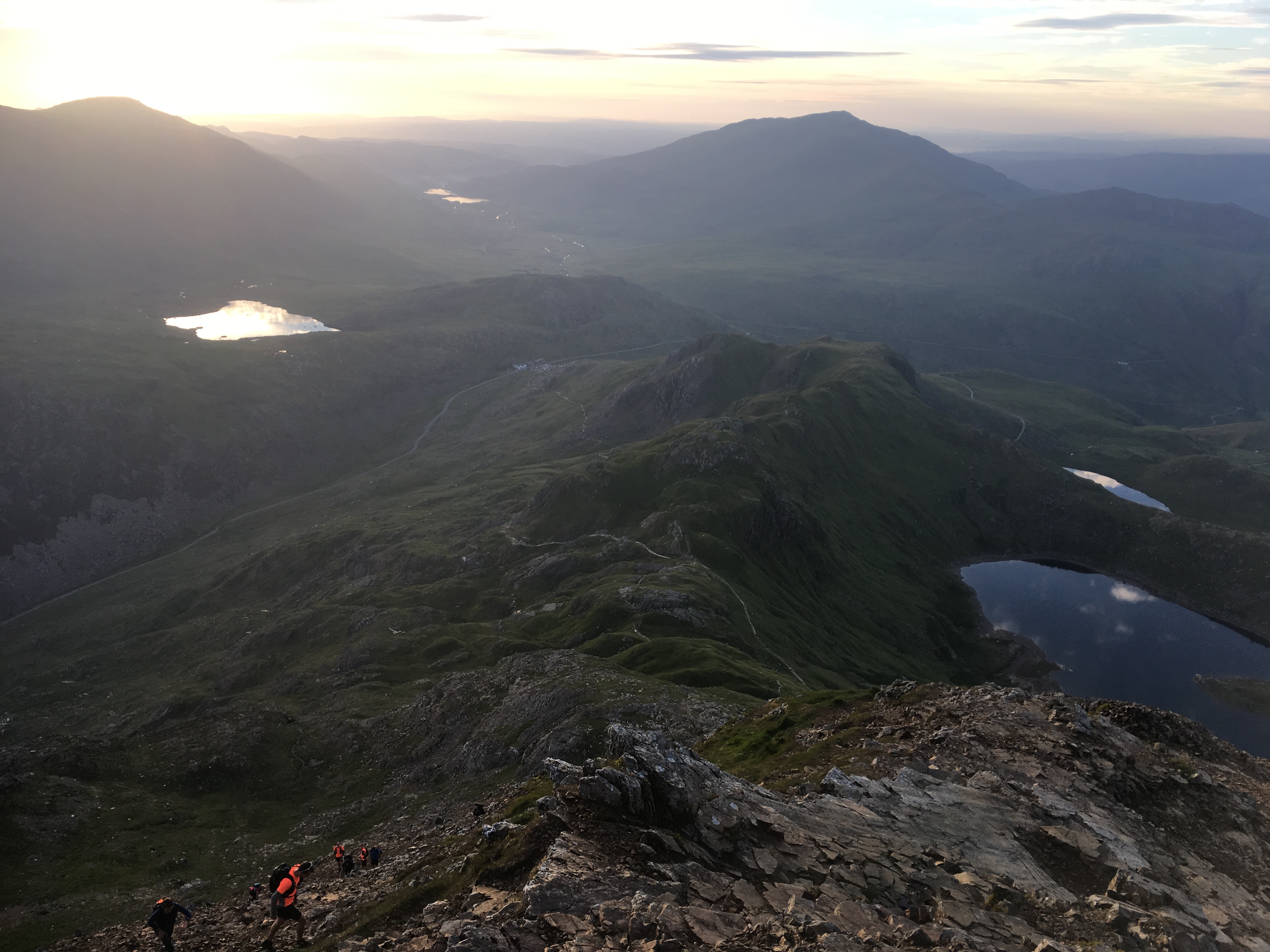 Its not often I set my alarm for 3AM. 3AM absolutely qualifies for the middle of the night. Yet, on Saturday June 23rd, there I was, lying on the bottom bunk of a hot YHA dormitory, waiting for the signal that it was time to get ready.

Dormitories are hard places to sleep, especially in a busy ‘youth’ hostel. At least I’ve had a couple of good hours sleep, I told myself.

The Welsh 3000s are the 151 mountains across the three main ranges of Snowdonia (Snowdon, Glyderau, and Carneaddu) that have a height of 3000 feet or more, and while as a youth, I walked, climbed and scrambled several of the peaks, I had never climbed them all. For at least the last few years I’ve had these on a mental list of adventures to do. The total ascent and distance (including the walk to the first peak, and getting off the hill from the last peak) is around 12000 feet of climb and 31 miles.

While there where many informal groups out on the route completing it, largely unsupported, I chose to do it with Climb South West. This is local (to me) company, led by local ultra running legend Justin Nichols, has, for the last few years been branching out from climbing courses to ultra events. These include the Jurassic 100, the Devon Coast to Coast and Dartmoor in a day. I’ve volunteered at the last few events Justin has run, and a place on this event was a thank you.

Through Thursday, and Friday, especially as I wound my way up the scenic, and almost traffic free A470 en route to Pen Y Pass, the low level butterflies in my stomach were an ever-present contrast to the story I was telling myself; I can do this, I will do my best to enjoy it, to look around, I’ve done enough to prepare, I am not stressed or anxious about it in any way. The fact this event was not billed as a race, but a guided challenge made this narrative all the more believable.

I was ticking of mid-welsh towns and milestone, some which meant, and still mean a lot more than others, Builth Wells, Rhayader2, Gilfach Nature Reserve, Langurig, Caersws (this place has some particularly interesting victorian brickwork…), and then just ahead of Dolgellau, Cadair Idris, resplendent in the early summer sun. On I traveled, ascending Bwlch y Groes (one of the highest public road mountain passes in Wales) and into the Snowdonia National Park.

By this point my heart was racing, but my smile was a mile wide. There is something about the way the Cambrian uplands merge into Snowdonia that will always makes me smile.

Nearly there, Blaenau Ffestiniog, Betws-y-Coed, Capel Curig, left to Llanberis. Pulling into a packed carpark at Pen-y-Pass, I managed to squeeze my car into a quite corner ahead of some logistical car shuffling ready for tomorrow.

With the car shuffled to Llyn Ogwen, a belly full of mushroom risotto, I headed for bed, ready for the day ahead.

Creeping out of my room, doing my best not to disturb others, I went through a somewhat familiar routine for a Saturday long run, morning ablutions, a cup of tea, cereal with nuts and seeds, mixing bottles of tailwind, checking everything, checking everything again. Having pushed my key under the reception counter, at 4AM I stepped out into the Pen-y-Pass car park to find it buzzing with people and rammed full of cars and vans.

I located a few other Climb South West-ers and soon after the familiar Climb South West van pulled in, guides were introduced, names checked off, ‘runner’ and walkers sifted, satellites located, start buttons pressed and off we set. In the hubbub of getting sorted, somehow 45 mins had elapsed, and at 4:45AM we set off. For me, running the sunrise is always a joyful experience, and one of those moments when the reasons for running make most sense. For that sunrise to be framed by the Llanberis pass, was a magical.

The familiarity of the Pyg track settled the last few days of nerves; it was good to be moving. before to long we were at the Crib Goch junction, and the first proper climb of the day started.

Our guide Matt sent us up the first scramble, probably the scariest of them all, with a few words of advice. Our little group of seven runners gelled fast, and lots of encouragement was given by all. The final push to the summit of Crib Goch (peak 1), in the post dawn golden hour, was incredible. It had been nearly 25 years since I was last on Crib Goch, and all those fears of scrambling the ridge along to Garnedd Ugain (peak 2) were unfounded.

I felt so at home. I think those fears were actually fear of fears, scared of being scared. I learn so much about myself on these types of adventures, and what I learnt, or relearnt, was to relax, trust my instincts, and well, not spend too much time peering over the edges to the valley far below!

From Garnedd Ugain, we ran to Snowdon (peak 3), dodging the many other people already on the hills. A quick turn around, a group photo and we off, winding our way off the mountain to the first refreshment point at Nant Peris.

I was making sure I was drinking enough, and while it was warming up, it was still relatively cool. We had a ‘three cups of tea’ time limit at Nant Peris, that was, we had until Matt had drunk three cups of tea to sort ourselves out and ready ourselves for the climb I was fearing the most. Elidir Fawr, 2 miles, 2500 feet of climb, and an average grade of 22%. We started out as a group, running a little, and soon hit the open hillside. my plan for this one was head down and march, praying that all those early morning hill repeat sessions would pay off. An hour later I conquered Elidir Fawr (peak 4).

In all my years of running, I have never done a climb like it. But I felt so good. Sweating profusely in the mid morning heat, and trying to be conservative with the amount I drank, it was all smiles.

We regrouped, and set off again, on a downhill that will forever be etched in my memory. The single track stretched out before us, pushing the pace up a little, we ran free, hot sun, butterflies, gentle breeze, blue skies, laughing with delight.

It was an utterly magical descent across Bwlch y Brecan, skirting around Foel Goch, and slowing down to a walk for the climb up to Y Garn (peak 5). Another short break, and once more we were off, another fast-is descent to Llyn y Cwn and the start of a hard climb up Glyder Fawr. This climb was brutally hard, a scree ascent, 25 minutes of cussing, the gradient hitting close to 40% in places.

Nearing the top I noticed that the rock had changed. Massive rocks, shattered boulders, and ice scared outcrops created over 10,000 years ago. The mountain and rock gods must have been very angry when it came to creating the Glyderau range. With Glyder Fawr (peak 6) done, it was on to Glyder Fach (Peak 7).

With these technically challenging, other worldly peaks down, we faced a decision point. A wild and crazy washed out bolder and scree strewn descent, or the long way round on a miners path. Did I say decision? there was no question. The scree descent in the gully to the the side of Bristly Ridge was just fantastic, right on the edge of control, with enough boulders to twist, turn and steady one’s passage.

Our group of 7 + 2 guides had split on the top of Glyder Fach, into a slow group and a slower group. Our slow group was expertly guided by Jez. At the foot of Bristly Ridge, Jez stopped to empty rocks and stones from his shoes ahead of a South face ascent of Tryfan.

We bumped into Justin here, who was out checking on process to the next refreshment point. To much relief he was carrying some spare water. I was carrying 1.5 litres, but it was long finished. The South Face ascent of Tryfan was really quite civilised! I’ve only ever climbed the North Ridge of Tryfan before. It was great to see some (properly kited out and well supervised) youngsters out on this mountain (the youngest told us she was 9). With Tryfan (peak 8) done, it was just the descent to Llyn Ogwen to some soup and clean socks.

Refreshed and ready to go, with another 500ml of water in my pack (a wise move leaving my car at this refreshment point), we set out for the third mountain range the makes up the 3000s, the Carneddau range. The first climb was another big one, Pen yr Ole Wen. This climb was another big one, 1.75 miles, and 2100 feet of ascent, I finally staggered to the top of Pen yr Ole Wen (peak 9).

Feeling a little nauseous due to the heat and some previously deposited trail debris that shall remain unspoken of, I forced myself to eat a little, and drink, and not really stop. I needed that climb to be far behind. We traversed the ridge around to Carnedd Dafydd (peak 10) that only involved a few hundred feet of climb.

I was beginning to tire at this point, and so to was my garmin, and then it decided that was it, and switched off! So it was over to the Strava phone app for the last 8 miles and 4 peaks.

Onwards we pushed to Carnedd Llewelyn (peak 11), the second highest peak in Wales and from here was an out and back to Yr Elen (peak 12). Confession time – I didn’t make this peak – I set off on my own, got half way, and had the only moment of despair on the trip. my quads were beginning to hurt, my right foot probably had a blister on the instep, so I made the decision to not run to Yr Elen. But i still had to run back up to Carnedd Llewelyn (peak 11).

I found Jez who was sunbathing in a cairn, and we set off to the next three peak, Foel Grach (peak 13), Carnedd Gwenllian (peak 14 – optional, but I chose to include it) and the final peak of Foel-fras (peak 15) where I climbed, weary legged, and teary eyed on to the trig point for a victory salute.

It was done. only it wasn’t – there was still 5 miles of grassy descent and stone track to the car park finish line. This last 5 miles was utterly quad destroying, and was involved almost as much walking as it did running. This last 8 miles was mostly down hill, yet still managed to include over 1000 feet of climb.

I finished, first to last peak around 11h55. This being only 7 hours slower than the fastest known completion of the route! Total time on the hill was 14h15mins

Being met by the Climb South West team at the finish was so good, hot dogs and cheap coke consumed and then that was it. Still buzzing, Jez and I were dropped back at my car, and I drove us back to the Plan Curig Hostel where I had a bed for the night.

What would I do differently next time? not much really, everything was pretty much as I wanted. The one blister was probably due to not wearing my shoes for more than a few miles before hand. And as always, more hill/descending training, and more time on Dartmoor would have been sensible!

Massive shout out to Climb South West and Justin who ran an excellent challenge event, and one I can’t wait to go back and do again.