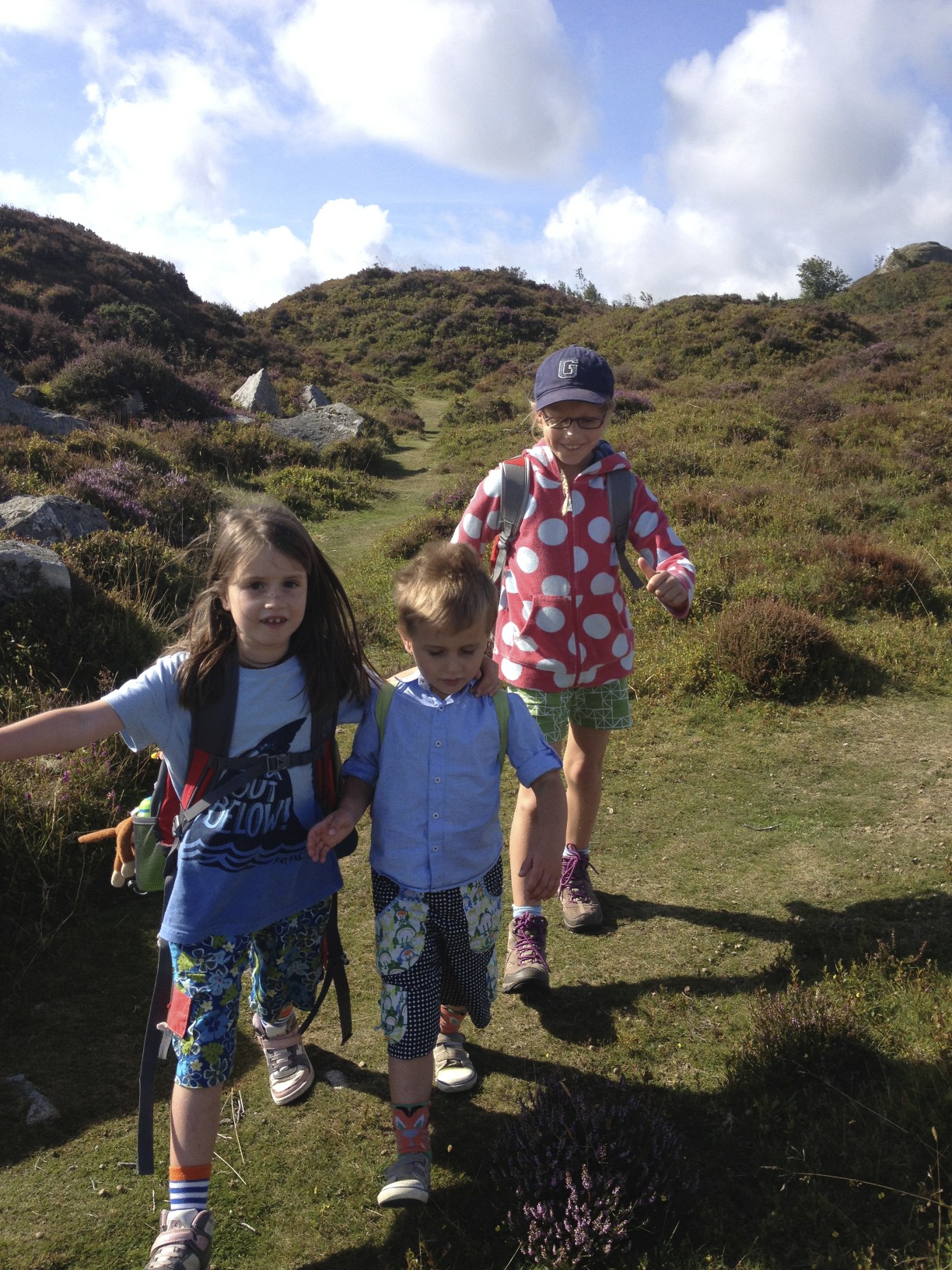 Life should be an adventure right? The Wild Things love adventuring, and it doesn’t really matter whether it is trip into the unknown, or a trip to the local charity shops. Watching them play, okay, joining in with them playing, it is a real joy to see them absorbed in whatever it is they are doing. Lately, we have been a bit more adventurous… I went running with Betty and LouLou in one of Exeter’s Valley Parks, each taking it in turn to be the navigator.

Following them reminds me of those ‘child in a nursery sketch maps’ – Everything is set out for the child to progress through, learning by incremental experience, yet the child seems to randomly zig-zag from one thing to another, creating some kind of chaotic map of lines – we ducked and dived, went up hill and down, in and out of the stream (that smelt like a campsite toilet), did hill repeats, rested, refilled our water bottles (not from the stream I should say) and did it all over again.

And well, they described it as the best fun ever, and didn’t seem to notice that they ran over 3 miles!

Adventuring, or micro-adventures, take a bit of planning, and more so when trying to work out how to do it with three children under 10, and sometimes that is probably just an excuse to not do it. What I love about the micro-adventure movement is the relative ease and simplicity that comes with doing things on a very small scale. Rather than planning epic adventures (although these are good too!) planning micro adventures makes things all that bit more manageable.

Lat Saturday, Mary was off to Birmingham for the day, to look at quilts. Wanting to have a fun day with the Wild Things, I had a little think about what we could do that would be an adventure, but that would be manageable for The Boy’s little legs but not dampen the spirit of adventure.

So, on Friday afternoon, I came up with a trip to Haytor Quarry, and then on to Bellever Forest for lunch… the weather was looking good, we would start early, picnic lunch and get home in time for tea. Perfect.

Saturday AM for me started with an early 7 mile run, but once back, and having said goodbye to Mary, it was time for breakfast, sick tablets (LouLou has a bit of a travel sickness issue), pack lunch making, and kit sorting. All this and it was only just 7AM – that is how excited everyone was. Other than hats, jumpers and coats, and lunch, I packed a map (just in case…) a camera, and some dolly-mixtures.

We arrived at Haytor at just before 9:30 and literally put on our bags and set off. First stop Haytor Quarry

The Boy was pretty much in awe of the hills, and rocks, and views, in fact, all three of them were – eyes wide with delight, the fact that there was ‘poo everywhere’ didn’t seem too big an issue!

Arriving at the Quarry they were quite simply awe-struck – I told them it was beautiful. they agreed

After exploring the nooks and crannies of the quarry, watching the swallows buzz us, marvelling at the dragon flies, the water lilies, we made our move and headed up to Haytor.

This was a fantastic lesson of perspective… “It doesn’t look very big papa” well, just wait until we get a bit closer. On arriving, The Boy declared “it is massive, but where are Victoria’s steps” We located the steps hewn into the Tor for Queen Victoria, and climbed to the top.

looking at the view was amazing – the sea, the hills, forests. It was like being on top of the world

Until we were swamped by german tourists!

The crowds rarely leave Haytor, so once down the back it was a lot less busy. We made a hasty descent and trekked across to Saddle Tor, through a herd of wild ponies climbed Saddle Tor and had a refreshment break

The Boy then discovered a lunch box hidden in a craggy gap – we opened it and found a letterbox. Not sure what to do, we simply stamped out hands!

We then headed back to the car, having walked a couple of miles already.

Having successfully navigated the bogs, the cows, and the cars and bikes, we arrived back at the car park. Ready for the next move…

We then headed over to Bellever, via the back lanes, and enjoyed steep steep hills and very narrow roads, old bridges, a couple of map checks, and then some pony avoidance through the forest car park.

Lunch – all adventures need lunch. Turns out I forgot the crisps.

After lunch, it was time to go forest exploring. This time we left our bags, and camera in the car, mostly because Betty and LouLou wanted to run a bit. So run we did – about a mile through the forest, until we reached a left turn.

We dropped back down a nice path to the East Dart River, hoping to pick up a path along the river. It turned out there was not really a path. for about 3/4 mile we crawled and shuffled and barged our way through, with one or two prickle incidents, including a brush with some old barbed wire.

We found a suitable crossing point, and, having taken our shoes and socks off, waded across the river, and continued back to the car park on the side of the river that had a path!

We made it back to the car park safely, and in one piece, and The Boy, who had a ride across the river was desperate to go paddling. LouLou on the other hand claimed her feet were still numb!

Here is the Strava file for part two.

All in all, the Wild Things were really, really pleased with their adventures, seeing things they thought were amazing, riding the line between in control and out of control (although they were never in any danger I should add), and they are still telling stories of it a couple of days later.

We are already plotting out next micro adventure, and are looking at putting together a micro adventure kit, well Betty is, she tells me it will involve rope, tarpaulin and fire making tools!

We said our goodbyes to this beautiful corner of the moor, and made our way home, sharing the dolly-mixutres out. All in we had ran/walked/crawled over 5 miles.

And the best bit about a ventures like that – they all seem to fall asleep at bed time with out a fuss!